The Houses of Parliament Tours

The Houses of Parliament runs alongside the River Thames with Victoria Tower at its southern end and Elizabeth Tower housing ‘Big Ben’ at the northern end. The exterior of the building is extremely familiar yet the inside remains, for many, a mystery. Visitors are welcome to take a tour around the Houses of Parliament. Guided tours last 90 minutes and are conducted by one of the knowledgeable and entertaining guides. Self-guided audio tours are offered for visitors who prefer to explore at their own pace. Tours are available in English, Spanish, French, Brazilian Portuguese, German, Italian, Russian and Mandarin. Both tours provide plenty of stories from 1,000 years of historical events and political intrigue, and explain how Parliament continues to function as a busy working building.

The first half of the tour follows the route the Queen takes when she attends Parliament once a year (usually in May) for the State Opening. In the House of Lords, see the sumptuous Queen’s Robing Room and the Royal Gallery and the more intimate Prince’s Chamber before entering the floor of the magnificent Lords Chamber which is lavishly decorated in red and gold.

Passing through Central Lobby, the tour moves into the House of Commons where the decoration is noticeably plainer. This part of the building was rebuilt in the late 1940s following bomb damage during the London Blitz. A statue of Winston Churchill surveying the wreckage stands as a reminder of Parliament’s ability to survive. Most visitors seeing the Commons Chamber for the first time say how small it is. Visitors can stand on the spot where Members of Parliament still engage in fierce debate.

Passing through St Stephen’s Hall, the tour ends in mighty Westminster Hall. Over 900 years old, this huge space has survived fires, wartime bombing, even severe insect infestation and its walls have witnessed the trials of William Wallace and Guy Fawkes amongst others. In more recent times, world leaders such as Nelson Mandela and Barack Obama have addressed both Houses of Parliament from the steps of Westminster Hall. A popular add-on to the tours is Afternoon Tea in the Terrace Pavilion beside the River Thames. Visitors can relax and enjoy both the superb views and tempting seasonal menu which combines tradition with a modern twist.

As the Houses of Parliament is a working building visitors are advised to check opening times and purchase tickets in advance. Tours are available on Saturdays throughout the year, and on most weekdays during Parliamentary recesses including August, Christmas and Easter. When the Houses are in session, visitors are welcome to watch debates for free. Book tickets online www.parliament.uk/visiting. 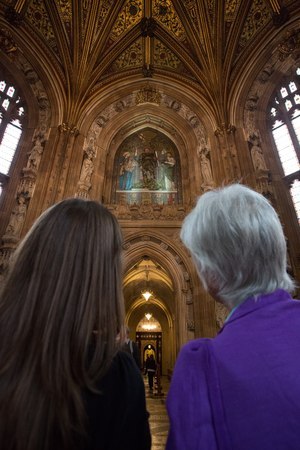